Difference between revisions of "Upgrades"

Other ways of unlocking new features and boosting production include: 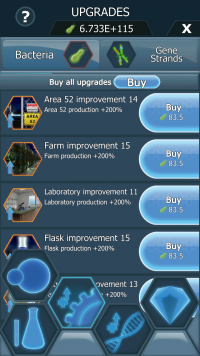 New Bacteria upgrades appear in the menu as you purchase more colonies (v. 1.1.2)

Bacteria upgrades give various multipliers to global BPS, BPC, as well as increase the production of different colonies.

Most upgrades can only be bought once, but some are iterative. Iterative upgrades usually become available after the player has bought 200 of one colony type. Afterwards, they can be purchased once per 25 new colonies.

For BPS colonies, there is also a second tier of iterative upgrades, which becomes available per each 1000 colonies owned and provides a 500000% increase for the production of that colony.

Currently, there is only one iterative bpc upgrade and it is unlocked after obtaining 200 Bacteria guns and it can be purchased again after each 25 new Bacteria guns.

All bacteria upgrades are lost when attacking a planet or entering a Black Hole. 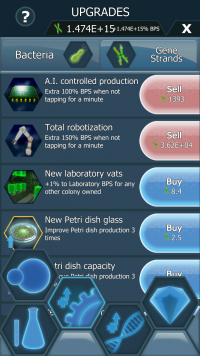 The purchased Gene Strand upgrades are displayed in red

New Gene Strand upgrades are unlocked by destroying planets. Previously purchased upgrades can be sold for 2/3 of their original Price (Gene Strands), rounded down.

Gene Strand upgrades remain after planet attacks, but are lost upon entering a Black Hole.

Upgrades can have a variety of effects, the simplest of which increase the total BPS, while others may enable new game mechanics, such as BPS conversion or Tapping Combo.

Many of Bacteria upgrades and Gene Strand upgrades only increase the production of one colony by a certain percentage.

The effectiveness of these upgrades is determined by:

The base effect is not displayed in the upgrade description. For regular upgrades, the base effect usually is 1%, but Toxic bullets, for example, has a base effect of 5%.

The final effect of the particular upgrade is calculated according to the formula: