BPS adds to the total number of owned Bacteria even when not tapping or when the app is closed. The player starts with 0 BPS and increases it by purchasing different bacteria colonies.

In later game, percentage increases or BPS modifiers become available. BPS modifiers can be local to one colony type or affect the global BPS. Since attacking a planet means losing the current Bacteria colonies, permanent BPS modifiers are a way of quickly recovering the Bacteria production rate.

BPS can quickly reach large numbers, which are displayed using abbreviations or scientific notification, if it has been enabled in the settings menu. 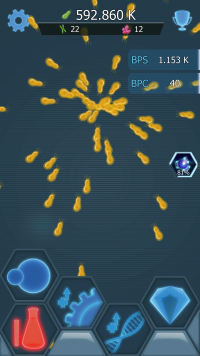 The yellow bacteria indicate that the idle BPS bonus is active

Some modifiers provide a boost to idle Bacteria production.

It is indicated by the Bacteria changing color to orange. Pressing on any of the menu buttons or the Red Bacteria, or a Nanobot does not break the idle BPS bonus.

Idle BPS bonus can be obtained and increased from Gene Strand upgrades and Evolved Bacteria.

It can also be boosted with the Dark Frequencies technology in the Dark Matter Institute.